MULTIPLE DEFECT INTERPRETATION BASED ON GAUSSIAN PROCESSES FOR MFL TECHNOLOGY 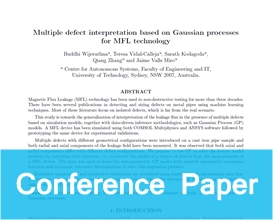 Centre for Autonomous Systems, Faculty of Engineering and IT, University of Technology, Sydney, NSW 2007, Australia.

Magnetic Flux Leakage (MFL) technology has been used in non-destructive testing for more than three decades. There have been several publications in detecting and sizing defects on metal pipes using machine learning techniques. Most of these literature focus on isolated defects, which is far from the real scenario. This study is towards the generalization of interpretation of the leakage ux in the presence of multiple defects based on simulation models, together with data-driven inference methodologies, such as Gaussian Process (GP) models. A MFL device has been simulated using both COMSOL Multiphysics and ANSYS software followed by prototyping the same device for experimental validations. Multiple defects with dierent geometrical congurations were introduced on a cast iron pipe sample and both radial and axial components of the leakage eld have been measured. It was observed that both axial and radial components dier with dierent defect congurations. We propose to use GP to solve the inverse model problem by capturing such behaviors, i.e. to recover the prole of a cluster of defects from the measurements of a MFL device. The data was used to learn the non-parametric GP model with squared exponential covariance function and automatic relevance determination to solve this regression problem. Extensive quantitative and qualitative evaluations are presented using simulated and experimental data that validate the success of the proposed non-parametric methodology for interpreting the proling of clusters of defects with MFL technology.