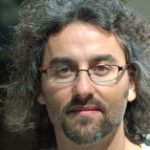 Jaime Valls Miro (Valencia, Spain, 1/11/1969) received his B.Eng. and M.Eng. degrees in Computer Science Systems, from the Valencia Polytechnic University, Spain, in 1990 and 1993 respectively. He received his PhD degree from Middlesex University, England, in 1998. His thesis examined the use of dynamics for trajectory planning and optimal control of industrial manipulators. Before joining the Centre for Autonomous Systems at the University of Technology Sydney, he worked for 5 years as a software and control systems analyst in the underwater robotics industry for a London-based company. Currently, he is an Associate Professor with the Centre for Intelligent Mechatronic Systems (CIMS) at UTS. His research activities include autonomous mobile robot navigation and mapping (in particular in unstructured scenarios such as USAR), visual SLAM, assistive robotics, machine learning and human-robot interaction. He is a regular reviewer of scientific works published in the top international robotic journals and conferences.