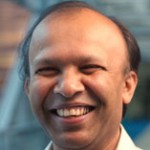 Gamini Dissanayake received the Graduate degree in mechanical/production engineering from the University of Peradeniya, Peradeniya, Sri Lanka, in 1977, and the M.Sc. degree in machine tool technology and the Ph.D. degree in mechanical engineering (robotics) from the University of Birmingham, Birmingham, U.K., in 1981 and 1985, respectively.
He is currently the James N. Kirby Professor of mechanical and mechatronic engineering at the University of Technology, Sydney (UTS), N.S.W., Australia. He has expertise in a broad range of topics in robotics including robot localization, mapping, and simultaneous localization and mapping (SLAM) using sensors such as laser, radar, vision and inertial measurement units, terrain mapping, multirobot coordination for SLAM, target tracking and probabilistic search, motion planning for single and multiple robot manipulators, legged robots and cranes, and application of robotic systems in urban search and rescue. He leads the the Centre for Intelligent Mechatronic Systems (CIMS), the UTS node of the ARC Centre of Excellence for Autonomous Systems (CAS).